“Alcohol and Drugs Hijacked my Brain!” Well, actually they did.

How Addiction Treatment Can Help You Regain Control

Anyone who has struggled with a substance use disorder, commonly known as “addiction”, has probably felt as if they were out of control or not in charge of their actions as if their brain had been taken over by something. You may be wondering “Why do I continue to do the things I know that are destroying my life?” It seems as if your mind has been hijacked.  But since there is no little green alien attached to your head as an obvious sign that something is wrong, you begin to doubt yourself.  Am I a bad person? Is this a moral failure?  Often, these misperceptions are reinforced by those around us who do not understand substance use disorders.

The fact is that substances such as alcohol and drugs do make actual changes in your brain. These changes can be short-lived in those who occasionally use or can be long-standing in those who chronically consume substances. Substance use directly affects the brain’s reward systems located in the basal ganglia.  This area is the first area involved in the addiction cycle. 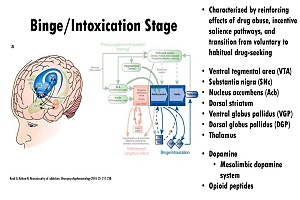 During the binge/intoxication stage, the use of substances makes changes in the brain’s reward system.  It is like the gas pedal is being pushed down hard. Substances not only directly “turn up” the pleasurable feeling one experiences, but they also disable the brain’s natural brake pedal to slow down the pleasurable feelings. Chronic use of substances causes changes in the natural balance in the reward system that leads to increasing amounts of substances being needed to have the same effect. In addition, someone struggling with addiction will not feel the same amount of pleasure or happiness from normal life events. The normal experiences just don’t create enough “gas” to get the engine of pleasure humming the way that substances can.

The Surgeon General’s report on Addiction describes another key factor in the binge/intoxication stage: “Activation of the brain’s reward system by alcohol and drugs not only generates the pleasurable feelings associated with those substances but it also ultimately triggers changes in the way a person responds to stimuli associated with the use of those substances. A person learns to associate the stimuli present while using a substance — including people, places, drug paraphernalia, and even internal states, such as mood — with the substance’s rewarding effects.

Over time, these stimuli can activate the dopamine system on their own and trigger powerful urges to take the substance. These “wanting” urges are called incentive salience and they can persist even after the rewarding effects of the substance have diminished. As a result, exposure to people, places, or things previously associated with substance use can serve as “triggers” or cues that promote substance seeking and taking, even in people who are in recovery.”

So, you are correct, alcohol and drugs do hijack your brain.  However, there are effective treatments and programs for substance use disorders that can overcome these changes and return control back to you.  You just have to make the choice to get help.